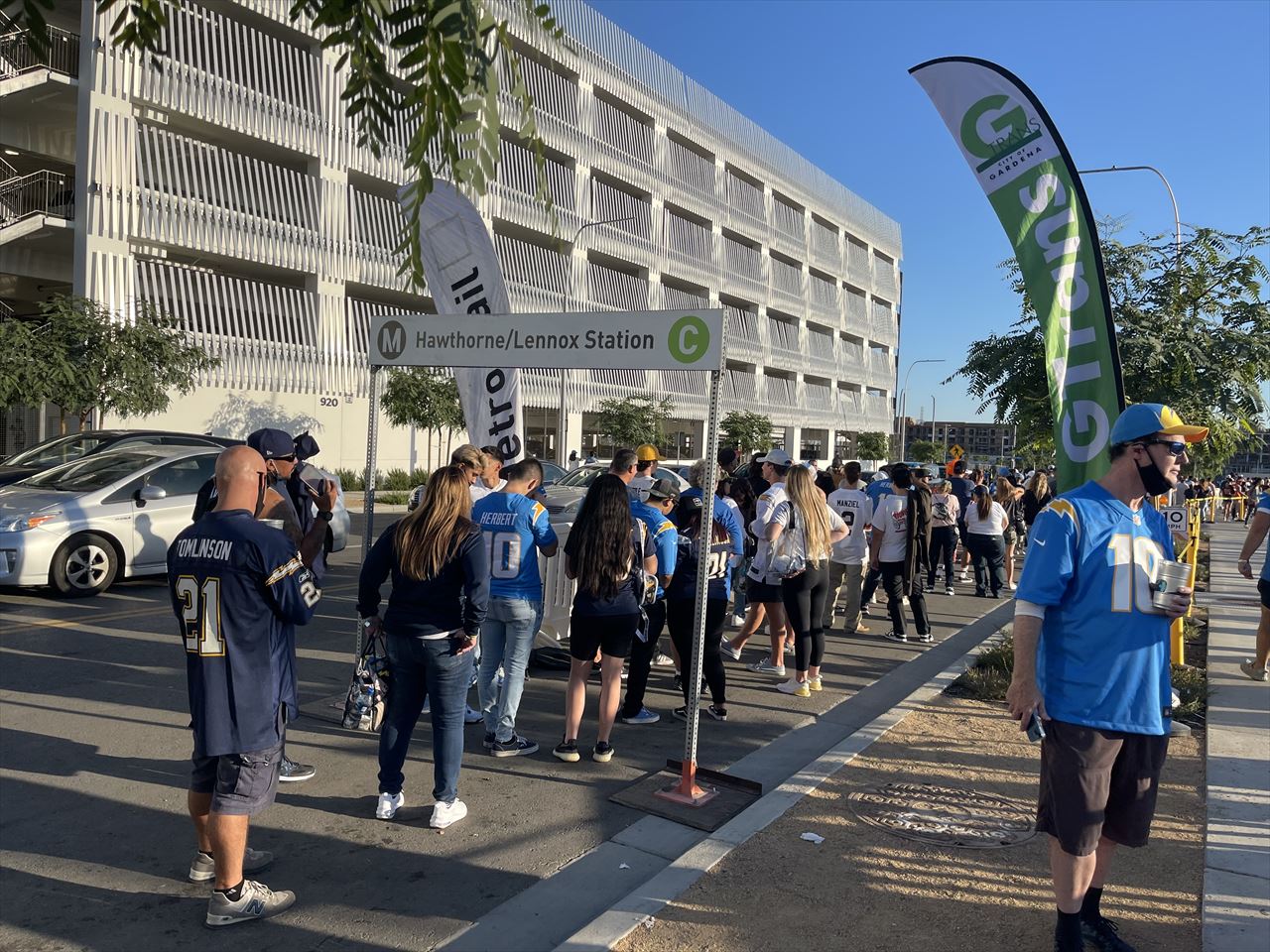 Public Transportation/Shuttle
●From/To Metro C Line (Green), Hawthorne & Lennox Station
Metro SoFi Stadium Shuttle (Free)
https://www.metro.net/riding/gameday/
A free shuttle service is available from the Hawthorne/Lenox Metro C-Line (green) station to Sofi Stadium on NFL game days. The free shuttle service starts about three hours before kickoff, runs every five to eight minutes, and runs roughly 1.5 hours after each game. The bus stop is located right in front of the West Plaza entrance/exit to the Hawthorne/Lenox station, on the northbound lane side of Hawthorne Blvd.
Metro Bus Line #212 or Line #40
LA Metro official App "Transit" || iPhone / Android
https://apps.apple.com/us/app/transit-subway-bus-times/id498151501
If you want to get to the stadium before the free shuttle runs, you can take these two buses from Hawthorne/Lennox Station, but you have to pay $1.75. The bus stop is located alongside the free shuttle stop.
Line #212 passes Prairie Ave., right in front of the stadium, so if you get off at Prarie Ave. & Arbor Vitae St., you can approach the stadium while checking the shuttle bus stop for your return trip. If you take Line 40, you can get off at La Brea Ave. & Arbor Vitae St. then walks west on Arbor Vitae Street. This is the same route that the free shuttle takes to the stadium.
After the game, the area around the stadium will be congested, so take the free shuttle on the way back.
●From/To Harbor Gateway Transit Center
731 W 182nd St, Gardena, CA 90248
GTrans 7X Stadium Express *SUNDAY ONLY
http://ridegtrans.com/7x-stadium-express/
Gardena City Transit operates a shuttle service on Sunday only, between Harbor Gateway Transit Center and SoFi Stadium. Free parking is available at Harbor Gateway Transit Center, located at the 110 and 91 freeways and close to the 405 freeway. Rather than going all the way to the congested stadium area and paying a lot of money to park your car, it might be better to park your car here and take the shuttle if this location is convenient for you. Shuttles depart about every 15 minutes and cost a $4 round trip.
*Passengers will access Line 7X at Prairie Ave & Arbor Vitae St during the hours that the SoFi Stadium Transit Facility is closed.
*For games starting at 5:20 p.m., service will continue to operate every 15 minutes after 6:30 p.m. in each direction until 10:15 p.m. The last bus departs from SoFi at 10:15 p.m.

Rally Bus
https://rally.co/
I'm sure many of you have heard of it. Rally Bus is the bus version of ridesharing, and if 25 or more people book a bus ride in advance from one of the dozens of pick-up points in Los Angeles, they are guaranteed a bus ride to the venue.

We'll try it out next NFL season and do some more research.