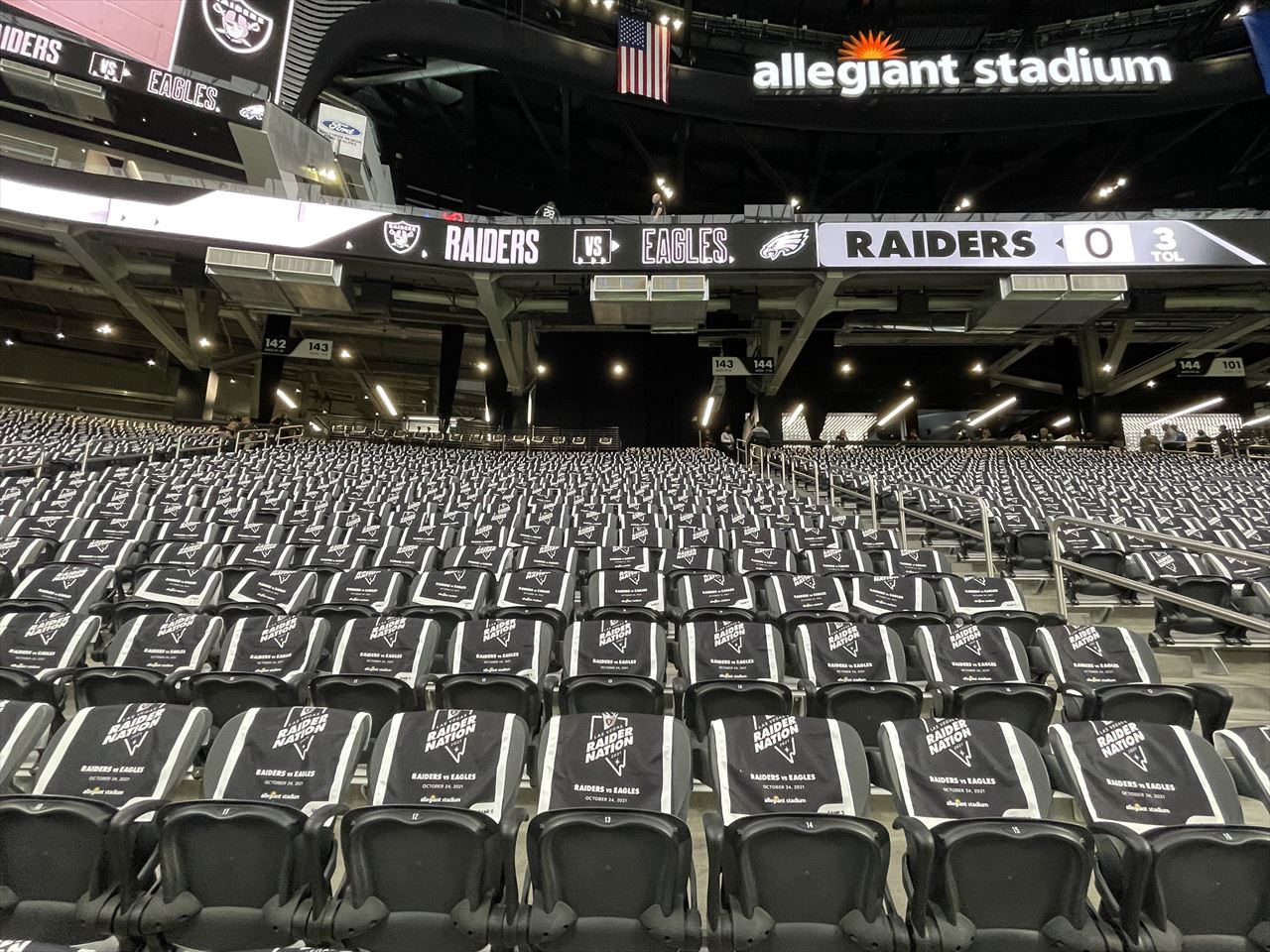 Allegiant Stadium has two top VIP clubs, the "Champions Club: Sec. 134" and the "Credit One Bank Club: Sec. 112". The clubs are located on both sidelines of the 50-yard line at the field level.

According to the club concierge, all food in the club will serve until roughly the end of the third quarter, and you can order drinks for an hour after the game.

Seats marked with a "C" in the 100-Level sideline section are CLUB seats. If you prefer to watch the game from a seat closer to the field, then CLUB seats are the way to go. Of course, closer to the 50-yard line is a better seat because you can see both ends and follow what is going on in the game.

Another way to look at these club seats differently is that the Raiders' owner's suite is at the 150 Level, which is the best height to watch the game, but if your seats are in the back of the club seating section, they are also among the best seats in terms of height and distance from the field.

*If you enter through the north or south entrances into the stadium, walk down the 100-Level concourse along the sidelines to find the club's private entrance.

The Twitch Lounge and Modelo Cantina Club are club areas reserved exclusively for club seat ticket holders in the above sections. The club is spacious and nicely designed, with concessions and a bar island to make us feel special. When I visited, the concierge gave me a free copy of the "Game Day" book, so be sure to ask the concierge. Food and beverages are available for purchase.\

There are several small room-like spaces on the field side of both clubs. According to the staff, the curtains on the field side are closed during Raiders games, so you cannot watch the game from this area, but you can watch it on TV.

Both clubs have exits to the general concourse at both ends of the club, but you must re-enter through the main entrance on the 100 Level when you return.

South End Zone: Sec. 121 - 125
The South End Zone is the side directly across from the "Al Davis Memorial Torch". The Raiders players tunnel is located between sections 125 and 126, the best place to be if you are a member of Raider Nation.

There are also six "Microsoft Suites" located in the rear of sections 122-124.

One thing you should know about your seat in this North End zone is that the front of these sections (sensibly, one floor down.) is a premium club called the Wynn Field Club, so if your seat is between sections 103-143, Even if you are in the front row, you are not close to the field. But, of course, they are great seats to watch the game.

In the 200 level of Allegiant Stadium, sections 208-242 and 218-232 are corners to end zone seating for both ends.
All along both sidelines are suites and lodge seating, so there is no general seating and no concourse to walk through.

The row configuration of seats varies from section to section on both ends, but the corners have 13 rows, and the end zones have a maximum of about 17 rows, making it easy to move up the stairs to the concourse.

Seats in the front rows of the 200 level are at the same height from the field as the 150 level, where the owner's suite is located, so they are good seats for watching the game.

North End Zone
Around sections 208 - 242, North of the stadium, is a plaza called "Coors Light Landing," where you will find the Al Davis Memorial Torch, a symbol of this stadium being the home of the Raiders!

The Coors Light Silver Bullets Seats: Sec. 202, 203, 247, 248
Row 17 in sections 202 and 203 and 247 and 248 are "Coors Light Silver Brett Seats," silver-colored single sofa chairs, the only premium-type seats in the 200-level general seating area. According to the Raiders' Premium Services Department, the sponsor "Coors" manages ticket distribution for these seats. If you know anything about these seats, please share it with us.:)

The 300 & 400 Level seats are on the third-floor stand of the stadium. Of course, there is some distance from the field, but if you want to see the entire field to watch the game, these are not bad seats at all.