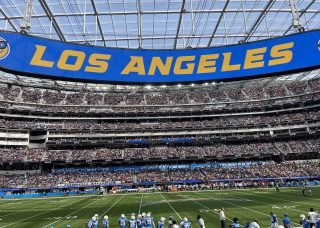 SoFi Stadium is the new home of the NFL's Los Angeles Rams (NFC) and Los Angeles Chargers (AFC) and is the NFL's first indoor/outdoor stadium.

The home field for the two teams, Sofi Stadium, was completed in 2020 at a total cost of $5 billion on the former Hollywood Park Racetrack site in Inglewood, California, just 4 miles from Los Angeles International Airport.

SoFi stadium has a seating capacity of 70,240, with the ability to expand by another 30,000 additional seats, making it capable of seating about 100,000. Include standing room only.

Overhead on the field hangs a huge 4K HDR 80 million pixels double-sided 360-degree videoboard, the largest in any sports stadium in the United States. It's just massive and huge!

The canopy, the stadium's roof, is made of ETFE panels, a translucent plastic material that blocks UV rays and is highly weather-resistant, and some of the panels can be opened to improve ventilation inside the stadium. Also, many LEDs are embedded on its roof panel to project images.

5G high-speed internet is equipped in the stadium, and there is a comfortable Wi-Fi environment during the game.

The expansive site of SoFi Stadium includes:
- the NFL Los Angeles (Media/West Headquarters),
- A 6,000-seat YouTube Theater,
- A park with a man-made lake named "Lake Park."
As of January 2022, the first phase of the development plan is also under construction, including retail and commercial facilities, residential units, and offices.

SoFi stadium will host Super Bowl LVI in 2022, the College Football Championship Game and WrestleMania 39 in 2023, and the opening and closing ceremonies of the 2028 Summer Olympics.

But on NFL game days, there are a few options, such as using the free shuttle service from the nearby Metro station or public transportation.

Based on our experience and research, we have listed some information about parking, public transportation, and rideshare that you may want to know in advance.

To help make your game day a little more fulfilling, we've created a gameday guide based on our experiences at SoFi Stadium. Enjoy the game!

As far as we know, the Sofi Stadium Tour is one of the best among other NFL stadium tours, giving you a great experience.
We highly recommend it!

Here's some information about the team store on non-game days.
The Equipment Room is open seven days a week from 11:30 a.m. to 6:00 p.m. On game and event days, it is only available to ticketed guests. 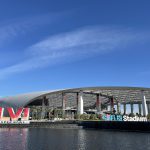 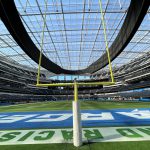 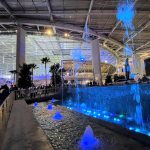 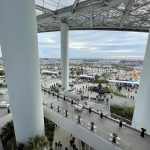